The Volvo Ocean Race in on again.  The 7 boats are currently on their fourth leg having left Melbourne, Australia on January 2nd for Hong Kong.

Leg number 8 will take the boat backs to Newport sometime in early May and I plan to be there cheering them on upon arrival. Last time I volunteered at the  Newport Stop Over and I plan to do the same this go around as well. The activities in the race village are fun and educational for people of every age. You can hold the actual trophy, check out all the boats on the dock and have “pretend pictures” taken of you. If you do come to visit contact us if you want to get out on the water for yourself. 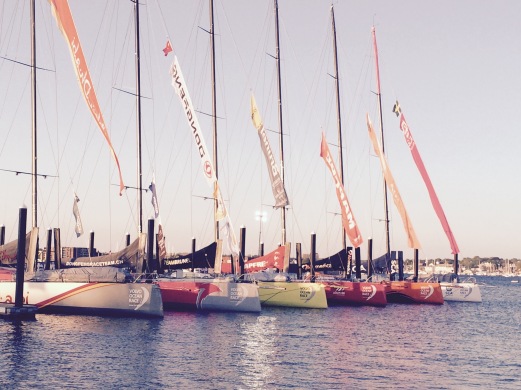 The sailboats have a lot of ocean to cover between now and when they return to Newport. From Hong Kong they will depart to Guangzhou, back to Hong Kong, followed by Auckland, NZ, Itajai, Brazil and then finally Newport.

A great way to follow the race is via the Volvo Ocean Race app.  I check it constantly so that I can follow where my favorite boats are at all time.  I became a fan of the race with the 2014-2015 edition when Team SCA was racing with an all female crew.  This year, while there is no all-women’s team, women are on all of the boats!

If you are interested in more of the history of the race, particularly the first ever race that was then called the Whitbread,  there is a fantastic documentary called The Weekend Sailor.   You don’t have to be a sailing fan to enjoy this great movie.  There is something for everyone; romance, international intrigue, excitement, comedy and drama.

Charter a private sail on our Catamaran based in Newport RI.